You can forgive the new kitten for the furrows she dug into your arm, but keep an eye on those scratches. 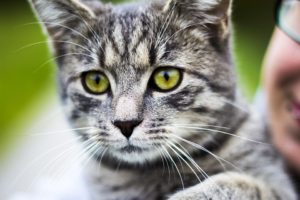 A new study by the Centers for Disease Control finds that 12,500 people are diagnosed with cat scratch disease every year, making it more common than previously thought. The CDC study estimates that about 500 CSD patients per year become so sick, they require hospitalization.

Bruce Kornreich, DVM, an associate director at the Cornell Feline Health Center, which conducts and sponsors research aimed at preventing and treating diseases in cats, said, “Cat scratch disease is caused by a bacteria called Bartonela henselae, which is spread among cats — and more rarely among other mammals, including dogs — primarily by fleas. In rare cases, B henselae may be transmitted from infected cats to humans via scratches or bite wounds. Less commonly, infected cats may infect humans by licking open wounds.”

Kornreich also explained that children younger than five years of age and immunocompromised individuals are at greater risk for cat scratch disease.

“Taking appropriate flea control measures, keeping cats indoors, deterring cats from biting and scratching, not allowing cats to lick wounds, monitoring young children in their interactions with cats, and washing hands after interacting with cats will decrease the likelihood of cat scratch disease,” he said. “In the event of a cat scratch or cat bite, wash the wound well with soap and running water. Monitor for signs of redness, swelling, discharge, and or swelling of regional lymph nodes, and contact a physician promptly if any of these signs are observed.”